Someone asked me this the other day, thinking that I had a rodent phobia. Ha! (sorry B!) 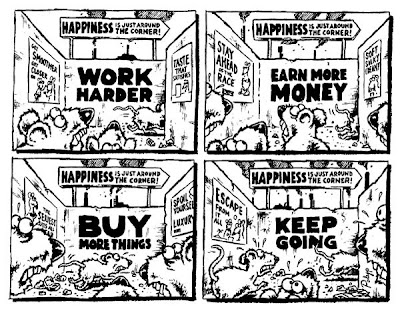 By rat I basically mean the rat race. The whole work-work-work, buy more stuff, get into more debt, work-work-work little wheel that most people seem to run on. The cartoon above sums it up perfectly. The more you have the more you want, the more you earn the more you spend. I don't really get it. It seems so empty-we sort of did it for a couple of years but soon realised that stuff never made us feel happy, but plenty of time together as a family did. So we opted out, and in doing so have never been happier. And strangely enough we now have more spare money with a much lower income, plus a much better and more content lifestyle. Win-win really.
There's my little thought for the day anyway.
Posted by Kelly at 11:08 PM No comments: Links to this post

The lethargy has hit

Can't be bothered. CBB sewing, or going out, or cooking, or doing my NEIS work or doing anything much really. The baby has finally won! I've just been lounging around, letting D do everything, watching birth and breastfeeding DVDs that Claire (my midwife) brought over. The homebirth is definitely on now so I think she's trying to catch up on 8 months of visits in four weeks!

The only clash with the lethargy is that we've decided that we want to buy land. Now. I've had enough, we've been talking about an acreage for nearly eight years now, it's time to just do it. So we've also been trekking around the countryside, driving down every little dirt lane there is, traipsing up driveways that have more in common with goat tracks and having encounters with braying donkeys (hilarious! except Holli nearly wet herself in fear). Oh, and all this done in 30+ degree heat, at 37+ weeks pregnant. Yes, i'm stupid. But I figure it'll be easier now than with a newborn.

We're down to one favourite-i'll find out tomorrow if they'll give us the money for it (the shack doesn't have a certificate of occupancy so the bank could decide to factor rent+mortgage into their calculations, which we can't afford) and if we can we'll go back and look again, and D can go out and trek the boundaries. Who knows, we could be giving ourselves a nice little Christmas present of 60 acres and early next year the seven of us can move to a one bedroom shack with minimal solar power. Most people's nightmare, but I can't wait! No neighbours, privacy, fresh air and water, and total peace and quiet.

Posted by Kelly at 10:47 PM No comments: Links to this post